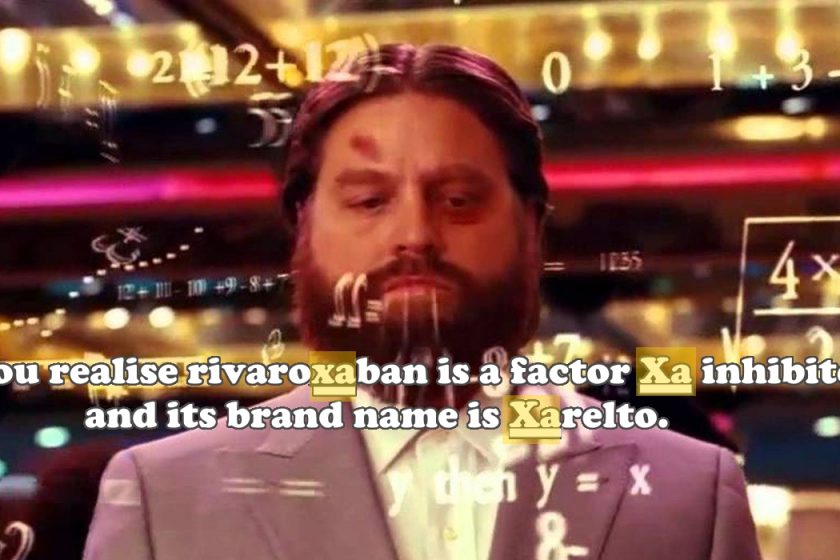 There is a wealth of knowledge in examining medicine names that not only help you look smart at trivia nights but also help you memorise medicines.

You will find that drugs within the same class often have the same prefixes, suffixes, or infixes — aka STEMs. For example, beta blockers such as bisoprolol and metoprolol have the suffix “olol”.

The use of STEM is governed by the International Non-proprietary Name (INN) or the respective country’s version, such as USA’s United States Adopted Names (USAN). I’m sure many of you have discovered STEM patterns by yourself and early in your studies. So we won’t go into much detail about it here. A large list of the INN and USAN stems at the end.

What is more interesting and not commonly taught is the naming method behind brand-name drugs. Brand names do more than just reassure your grumpy customer that the drug isn’t from a third world country.

“The (drug’s) brand name must be unique to protect the trademark; not sound or look too much like any other drug name to avoid medical errors; and should suggest a story, property, use or emotional tie.” — The ABCs of naming a drug.

Some brand names are clever portmanteau ‒ two or more words blended to make a new one. For example, Lasix (frusemide) comes from Last Six hours, in reference to approximately how long it affects the body. The HRT, Premarin, derives its conjugated estrogens from pregnant mare urine.

If this is the first time you’ve learnt these, don’t think you’ve broken the Da Vinci code. Lecturers love teaching these to new students, so try and act surprise. But you may not get taught about Sinemet (L-DOPA with carbidopa): from Latin, sin (without) and emet (vomit). Sinemet can still cause nausea and vomiting but when compared to L-DOPA alone it’s less likely to.

Memorise Medicine’s flash card’s notes section contains many more examples of brand name breakdowns you may not ever learn. Example:

The use of STEMs is in numerous brand names. For example, if the brand name has the “cor” stem, it probably relates to the heart. “Cor” is Latin for heart.

The use of the stem “os” (Latin for bone) is in numerous drugs that affect bone. It’s even seen in one of the main class to treat osteoporosis ‒bisphosphonates.

Making up stories about drug names can be an effective way to learn. The stronger the association that easier it will be for you to remember. For example, for Cordarone X, the X stands for X-rays because amiodarone potentially causes pulmonary toxicity so you will need regular X-rays while on this medicine. Benzodiazepines such as temazepam are good for catching zzz’s. Selective serotonin reuptake inhibitor (SSRIs) are also serotonin sperm release inhibitor in reference effect of causing impotence.

So, what’s in a name? That which we call a drug. By any other name would work as well (despite what that grumpy customer says). However, it may not be as easy to learn.

Students that are studying medicines. Let us come together and help each other. If you have any good terminologies to help memorise medicines, post it in the comment section. They may be added to the notes section to their respective flash card.